​* KJV who wanted to divorce his wife, so it leans in that direction.

​If you read RYM then you saw in Chapter 11 why learning to look up words in the original language was important. Pastors were telling me that I should divorce my husband due to adultery. Believing these pastors were bible scholars, they tried to convince me to do what I had a moral right to do.

​But then I purchased a Strong’s Concordance and discovered the truth:

​Again, very few divorces in the church are for the reason of adultery, even if that were the correct “exception.” When Erin was told that she had grounds for divorce because I was in adultery, she sought to find out the truth. What she found was that is many Bible translations the words “adultery” and “fornication” or “moral impurities” were used interchangeably as though they were the same words – but she found they are not the same words! The word “adultery” (Strong’s Concordance in the Greek or original language is 3429 Moichao) that means an act of intimacy after marriage. But the word “fornication” (4202) means an act of intimacy before marriage. Therefore these are two separate sins and should not be confused.

​So when the Bible says in Matt. 19:9 “And I say to you, whoever divorces his wife, except for immorality, and marries another woman commits adultery.”

​There is a free ONLINE Strong’s Concordance for NASB (which is what is primarily used in the RYM and WM book). It’s VERY easy to use:

2. Paste the verse you want to search:

3. When the verse opens, make sure you: ​ Check the box Strongs Numbers so that each word will show up linked to the original Greek (since the New Testament was translated from Greek).​

4. Since the word in question is immorality, then if you hover over the word, you’ll see immorality (below) is 4202 to click on.

5. Then it opens to reveal the definition is not “adultery” but “illicit sexual intercourse.” 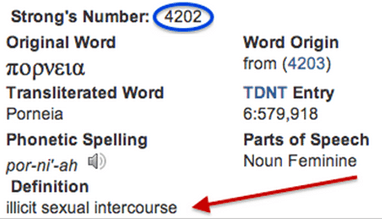 ​6. And if you’re not exactly sure what “Illicit” means, you can look it up in any online dictionary OR better yet use another FREE online source Free Bible Dictionary

* Again, this is a KJV definition, so it has that lean when it says “conjugal” that is defined as between a husband and a wife. The king wanted to divorce his wife, so he had an English translation. Here is a very short history lesson on the history of the KJV.

​7. To dig for the truth is the only way to combat the lies that the enemy will try to use to stop your Restoration Journey. The only way to make it through, is to use a map and compass and decipher the clues hidden along the way: Trust, seek and listen.

​Matthew 13:44—
“The kingdom of heaven is like a treasure hidden in the field”

Proverbs 3:5-6—
“Trust in the LORD with all your heart and do not lean on your own understanding. In all your ways acknowledge Him, and He will make your paths straight.”

​Matthew 6:33—
"But seek first His kingdom and His righteousness, and all these things will be added to you."